When we first started trying to synchronize the dome with the telescope, much to my surprise, there were many areas of the sky where the telescope would end up pointing at the dome, not the slit.  After going thru the math carefully, a few discrepancies were uncovered and corrected.  For us, this turned into a rather critical piece to get fixed as the slit in our dome is somewhat narrower than some other domes on the market.  The dome itself is not exactly large.

After fixing the math, I did a series of tests.  Test setup is ideal for doing this.  I have a webcam mounted right under the telescope, then a pair of alligator clips at the end of the telescope that create an effective optical axis just under the scope.  The axis from the center of the webcam corresponds with the hinge on the alligator clip, clearly visible in all the shots I took at various cardinal locations to validate the pointing.  I have a centerline marked on the inside of the shutter to get precise feedback on how well it’s pointing.  Tests done in broad daylight, shutter closed so we can see the shutter marks in the webcam, and there is enough light to illuminate the webcam.

What i did learn from this exercise, getting the measurements for dome geometry correct is critical.  In order of importance, the MOST important detail is to get the dome properly aligned with the real world directions.  If it’s off by 4 or 5 degrees, expect to see the telescope pointing at the dome roof in many directions.  It is equally critical to get the distance from the mount rotation point to the optical axis exactly correct.  For ‘dead accurate’ pointing, you must also get the north, south, and vertical offsets correct.  A couple of cm discrepancy in these measurements will result in many more cm of pointing error over the distance to the dome from the telescope.

On to the test results. First shot is for reference, telescope is parked, and dome slaving  enabled. 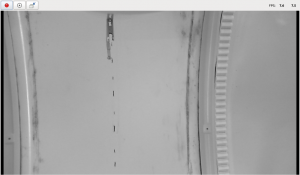 Second test, point the telescope down to the horizon in the north, with scope on the east side of the pier, take the shot, then slew the telescope thru a meridian flip to a point just on the other side of the meridian.  End result of this first test:- 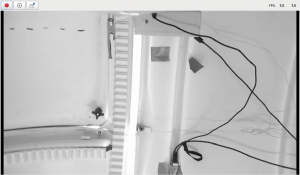 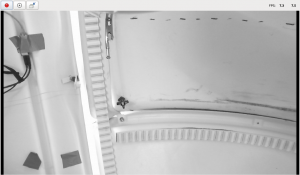 As you can see, telescope is pointed right at the base of the dome ring, and the reference line is right in line with the alligator hinge clip.

Next test, repeat the above but now pointed to the south. 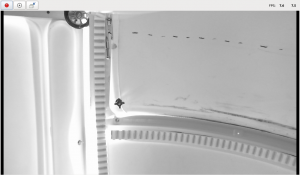 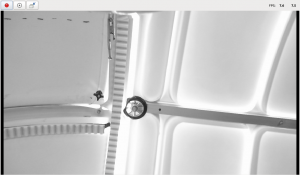 Next test, head off to the east and west horizons 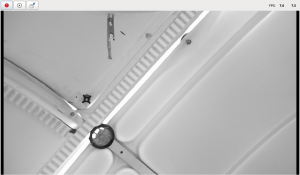 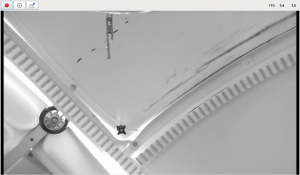 Now that we can see all the cardinal points look correct, go thru a few more points higher in the sky.  Northwest, Northeast, and SouthWest at an alt of roughly 45 degrees 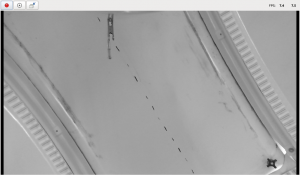 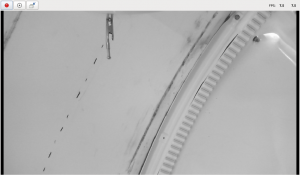 And finally, a shot high near zenith, altitude 75 degrees. 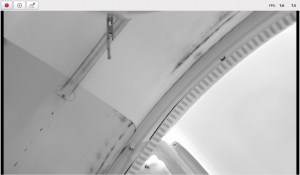 I am pleased with the final result, we can now point this telescope anywhere, and when the dome slaving is active, it’ll be looking thru the center of the slit in every direction.